We are fortunate to have beautiful stained glass windows to adorn our church building.

Over our main front door is a beautifully colored stained glass rose window. The window symbolizes the the four evangelists with the Lamb of God in the center and surrounded by a foliated design suggesting the Vine. These windows were designed and made by Charles J Connick of Boston. 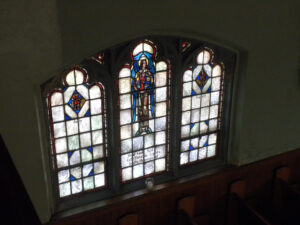 The six side windows represent the six days of Creation, with the center angel in each one holding symbols for each of the days of the week. In each symbol occurs a figure of the Creator in ruby robes and each angel is separated by an arc of different colors suggesting the rainbow. An appropriate bible verse is inscribed under each window. Medallions in the side panels of each group, twelve months in all, represent the labors of the months. These are favorite subjects of Medieval Craftsman.

In the chancel window, Christ is represented as the principal figure, in the center, with the Virgin Mary on the left and St John the Evangelist on the right, with their symbols below, the lily, the chalice and the serpent. The medallion under the Blessed Mother represents the Nativity, the center one the Crucifixion, and under St John his revelation. Revelations 21, second verse, “And I, John, saw the Holy City, Jerusalem, coming down from God out of the Heavens”. These three figures unite in indicating the Birth, Sacrifice, and Promise of our Lord. Here the Vine is used again as the symbol of the Church. “I AM THE VINE”.

There are no events to show.